I have a Christmas post coming so that I can remember our first Christmas away but I know that you’re all waiting on the chaos that ensued on our travels with our two little darlings so we’ll do things out of order.

Our travels began with a 4:15 wake up call for the kiddos and a cab ride to the airport wherein Mia had to sit on my lap due to all of our baggage. Mia was so incredibly pleased. She chanted “I’m on mama’s lap” the entirety of our journey to the airport. The taxi driver wasn’t quite as pleased as Mia.

We brought our stroller for easy transportation of Mia and she lasted in it a whopping 5 minutes before screaming, “LET ME OUT! LET ME OUT!” at the top of her lungs. She then ran up and down the waiting area in the incredibly small airport saying hi to everyone and climbing up and down on every free seat.

The flight to Amsterdam was relatively uneventful. Brooks had his iPad and Mia had Brett’s old iPhone so they were both entertained. At the Amsterdam airport Mia again refused the stroller in favor of going round and round and round on the walking escalator. The merry-go-round on the walking escalator was only interrupted by fall-on-the-floor fake crying tantrums when we tried to get her to stop. You can imagine how pleased everyone without children was with she and Brooks.

For the trip from Amsterdam to Houston we booked the aisle and window seats of two rows, banking that no one would select a middle seat. This plan would allow for both Brooks and Mia a bit of extra room to lay down and rest. Ha. Ha. Ha. I checked the seat map right before boarding and both seats were still empty so imagine our surprise when someone showed up to sit in the middle seat right before boarding was over. They both accepted our offer of the window seat so that the little one would be closer to us and THANK GOODNESS they were both easy people to be by.

Brooks was pretty easy for the duration of the flight. He’s always thrilled with the movies and games on the in flight entertainment and has his iPad as back up. His biggest issue is that the airlines do not provide food that is free of his allergies so we are constantly up and down getting things he can eat from his backpack.

Mia, on the other hand… all I can do is sigh. She’s such a two year old. For one, she isn’t thrilled with headphones and doesn’t really have the stamina to sit through a movie. However, she did like the movie, The Aristocats, which she referred to as “the kitty movie.” Mia cannot say the /k/ sound. Instead it comes out more like the /t/ sound. It was the only movie that she would watch so every hour or so she would yell out, “MAMA! I WANT THE TITTY MOVIE! I WANT THE TITTY MOVIE!” My God, the embarrassment. 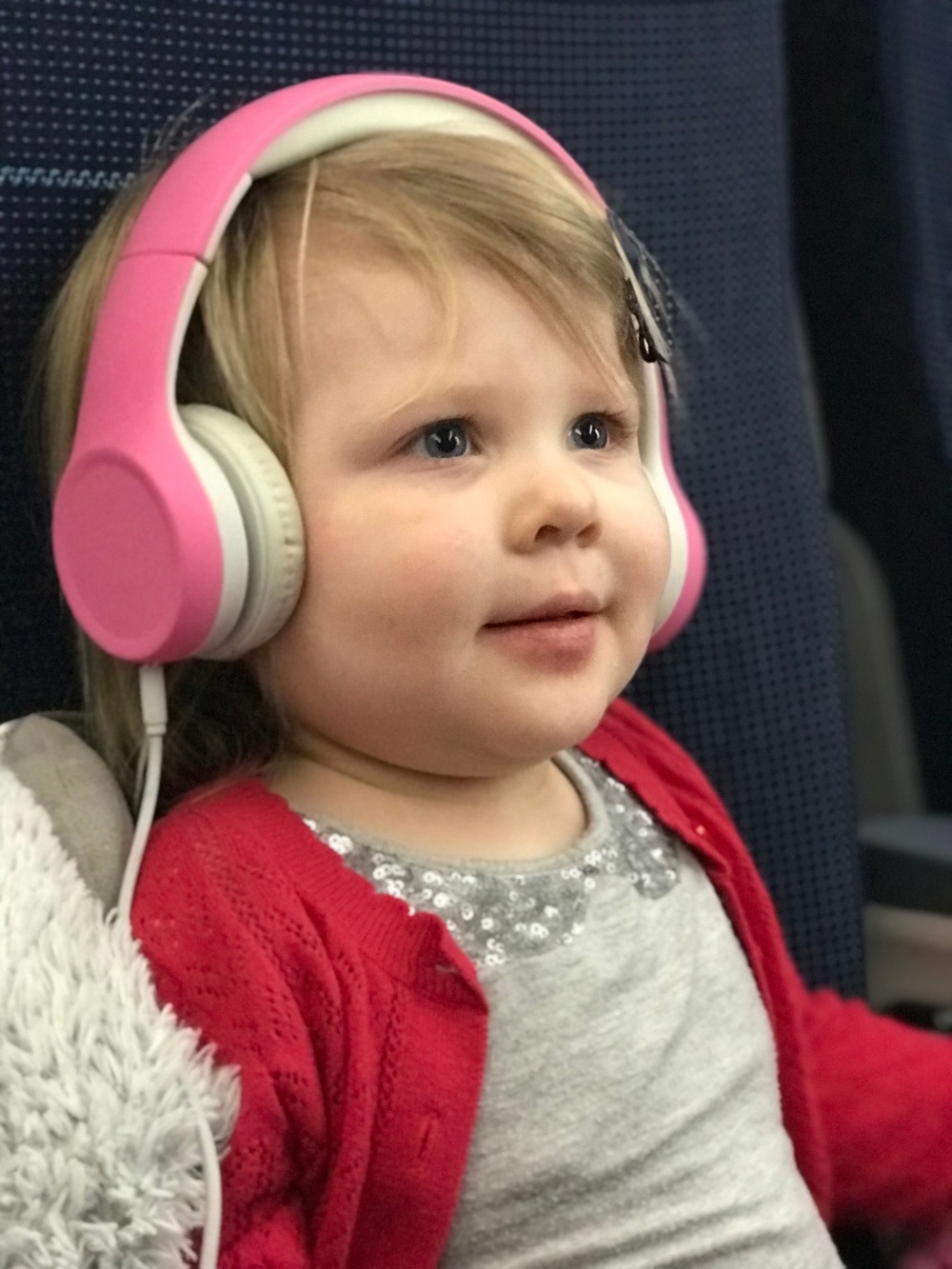 Don’t worry though, she would interrupt these requests for risque movies with running up and down the aisles looking around as if lost and saying, “Mama? Dada? I tan’t find you anywhere!” Concerned patrons and/or flight attendants would reach out for her and she would run back to us screaming, “They’re chasing me! They’re chasing me!” Sometime during this madness Mia lost Brett’s old iPhone. We looked high and low and so did the KLM staff but the little stinker did a good job of hiding it! It’s gone!

She was basically a tornado of two year old until she couldn’t do it anymore and passed out face down in her chair. 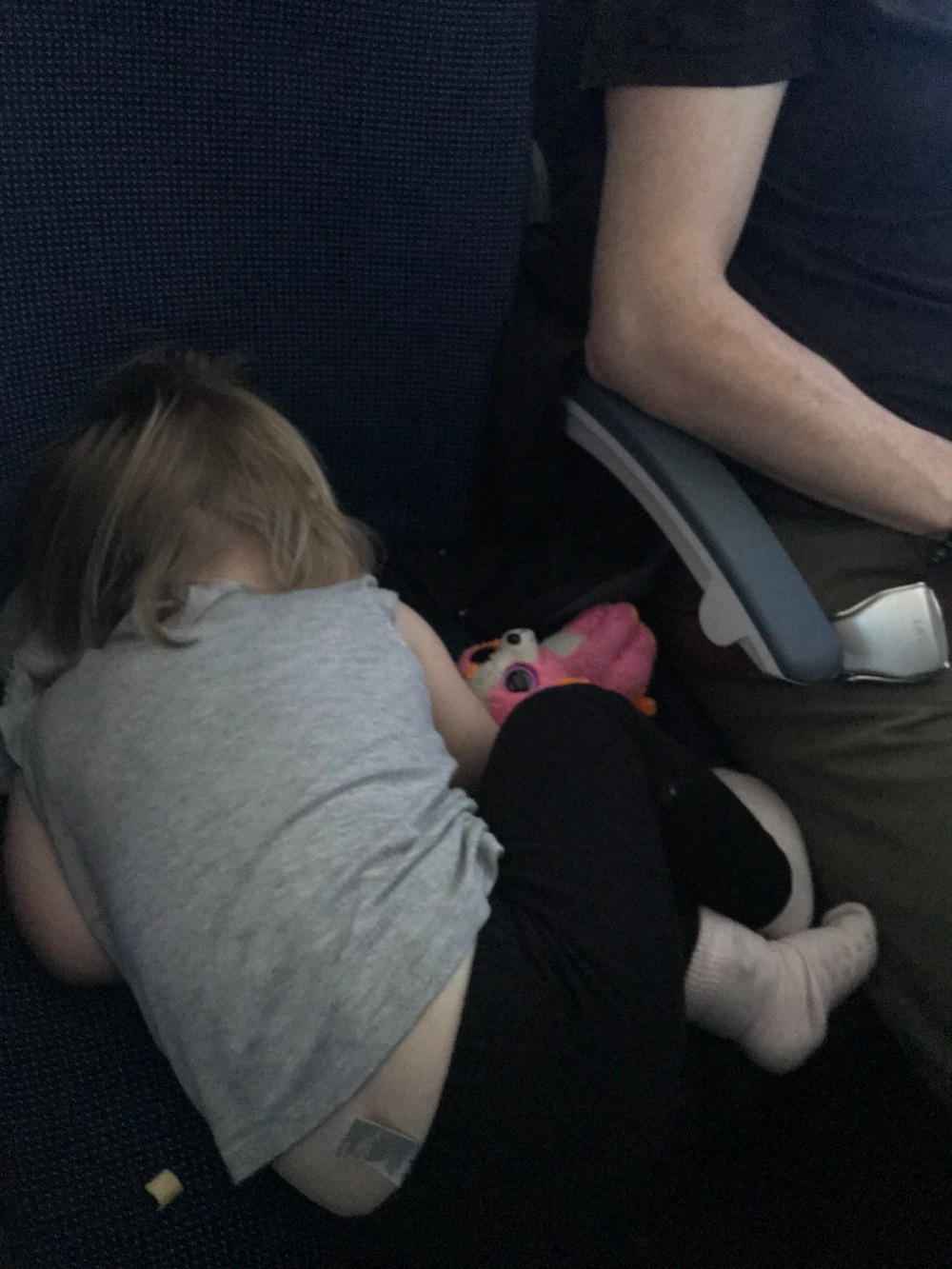 When we got off the plane, Keith, Sandy, Hudson, and Adelei were holding welcome home Brooks and Mia signs in the arrival area. The flight attendants walked out and said, “Mia! Oh we know Mia!”

Our time back in Houston was fabulous. Seeing everyone we love was so soothing to the eyes and to the soul and filled us up with so much warmth. It was like having a glass of wine on an empty stomach. You feel it on your insides and it makes you smile with it’s warmth. There’s no way to share all the joys so I’ll just share a few highlight pics.

Fabulous night at Hotel Zaza with lovely friends. Thank you for everyone who made the trek to visit! We know holidays are tough but we were so happy to see you all. Those of you that didn’t make it, you were so missed!!! 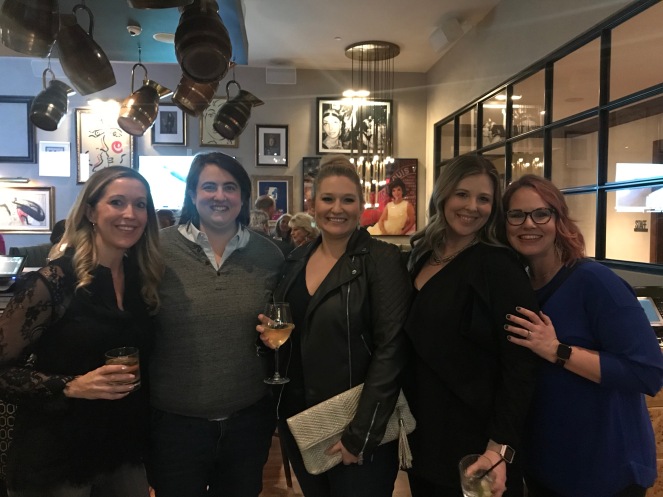 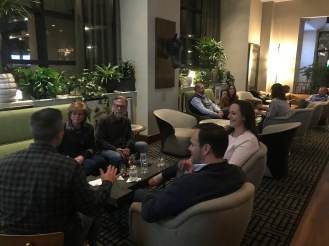 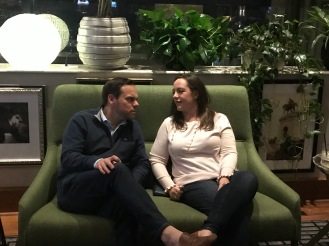 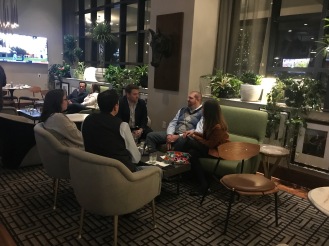 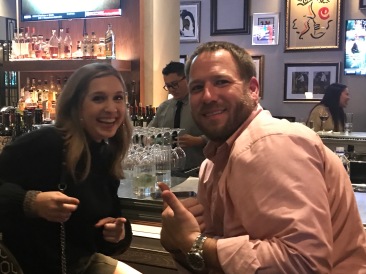 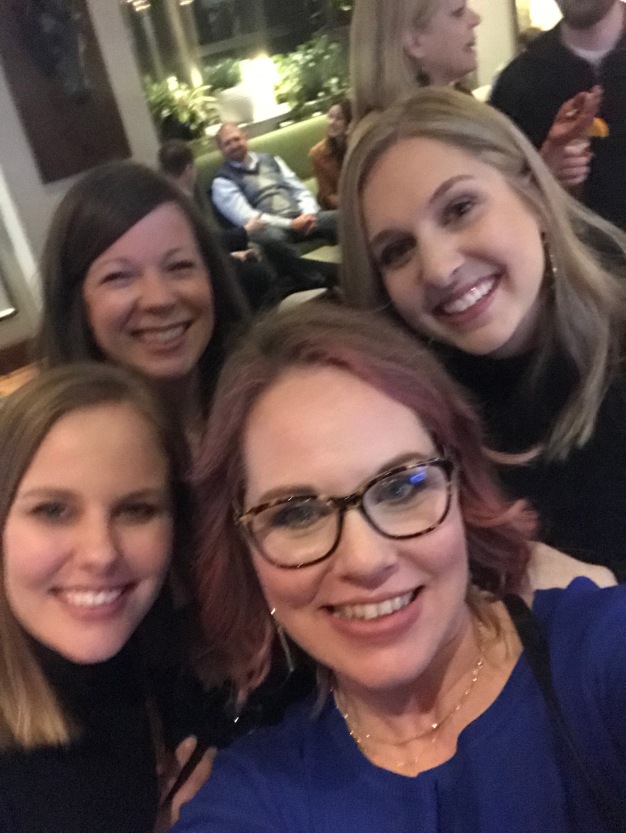 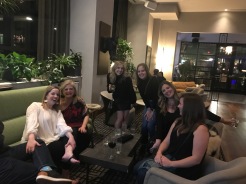 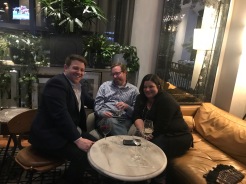 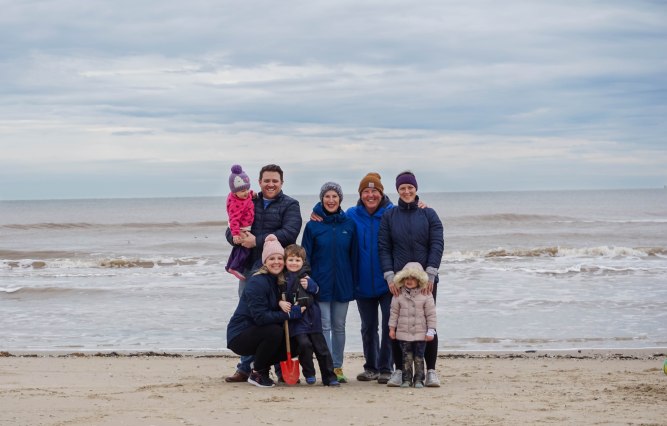 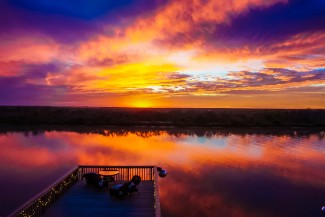 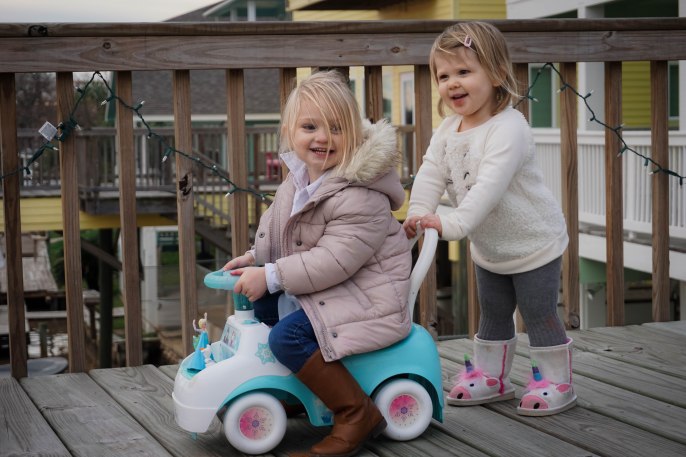 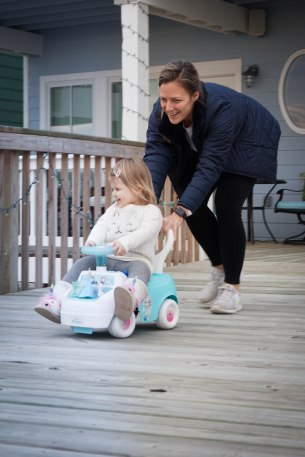 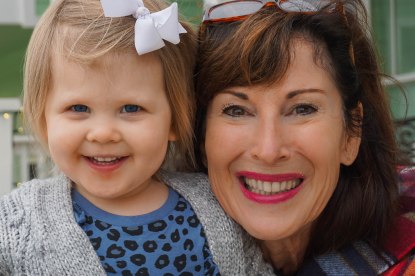 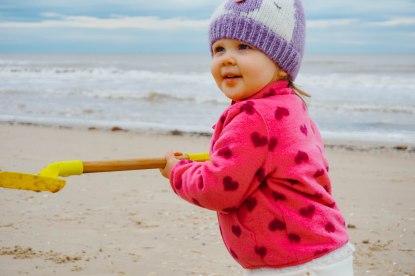 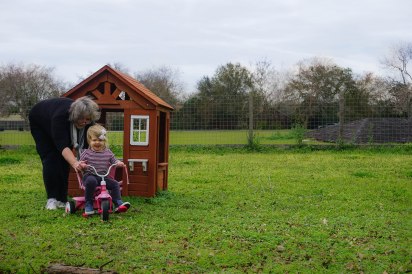 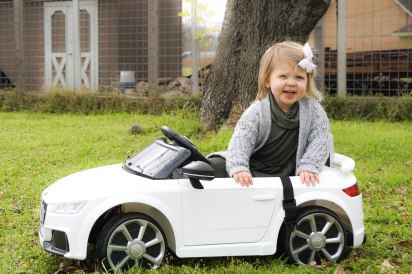 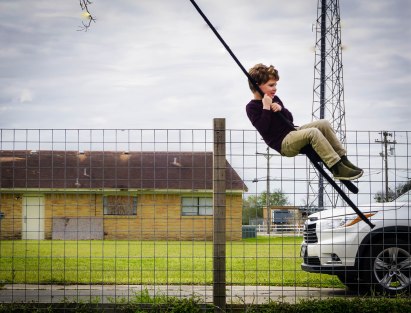 Christmas with Hudson and Adelei and Papa’s gig with Texx Roc at Clays with a guest appearance by the one and only Brett Mouton (and Mia who, like her daddy – can’t stay off the stage!) 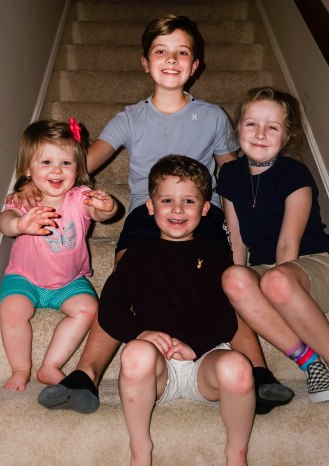 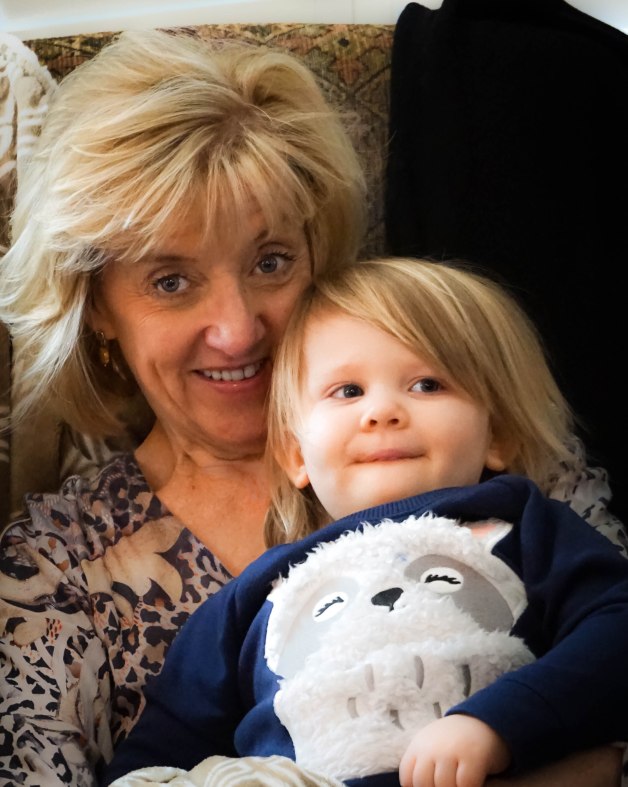 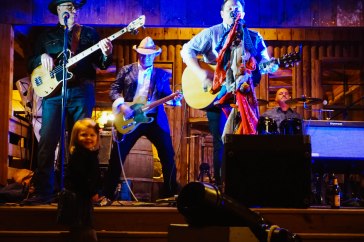 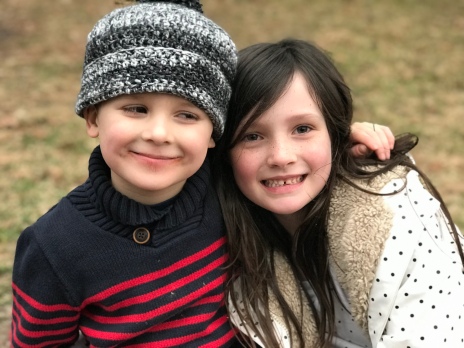 We were supposed to fly out Monday but woke up to an email saying that our flight from Amsterdam to Aberdeen was cancelled due to high winds. All of the alternate routes had us in airports all over the UK for crazy long stretches. No thank you to hanging out at Manchester airport with two crazy jet-lagged kids for 10 hours! The next easiest flight out was Wednesday so after two hours on the phone with KLM, we had two free days in Houston! 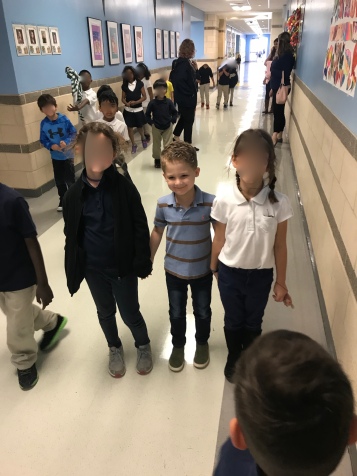 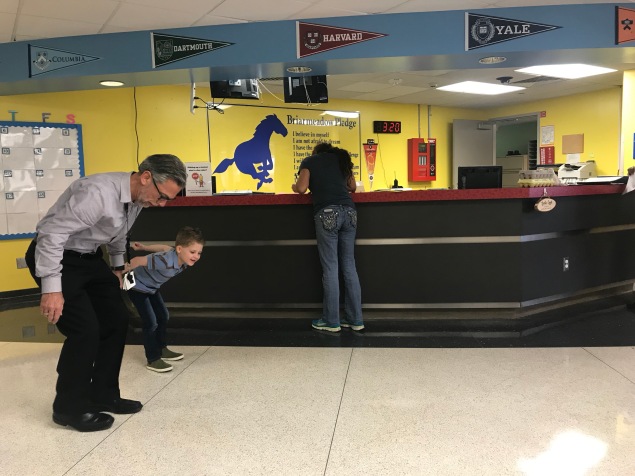 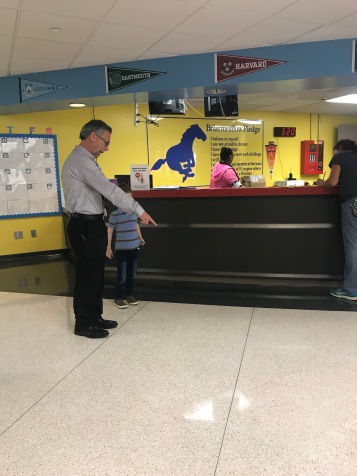 Playing at the park in our old ‘hood in the brilliant Houston weather and swimming in the hot tub. It was 75F (24C) and sunny. Not too bad a day to be stranded in Houston. 😉 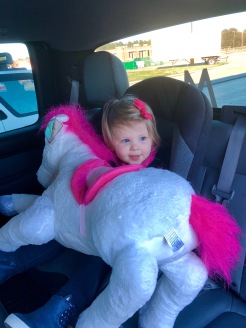 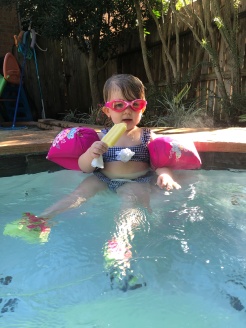 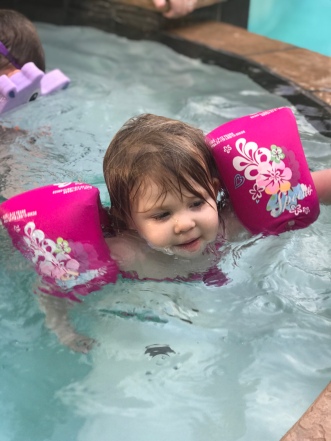 Wednesday rolled around and we were very ready to go back home. Two weeks is a long time to be gone from your own little bed.

We were concerned that the current government shutdown and TSA workers calling in sick would make for excessively long security lines. The lines were a bit longer than we’ve experienced recently but we only ended up waiting about 20 minutes. My stomach turned at the fact that everyone we saw there was doing their job diligently while not getting paid. I hope it is resolved soon!

As soon as Mia was released from the shackles of her stroller to go through security, she refused to go back in. She roamed around the terminal for a while and eventually settled down with Brooks to watch the iPad.

Our seats were the first row of the economy section of the plane which was great because there would be no complaints from passengers in front of us from Brooks pounding the screen on the Angry Bird game. 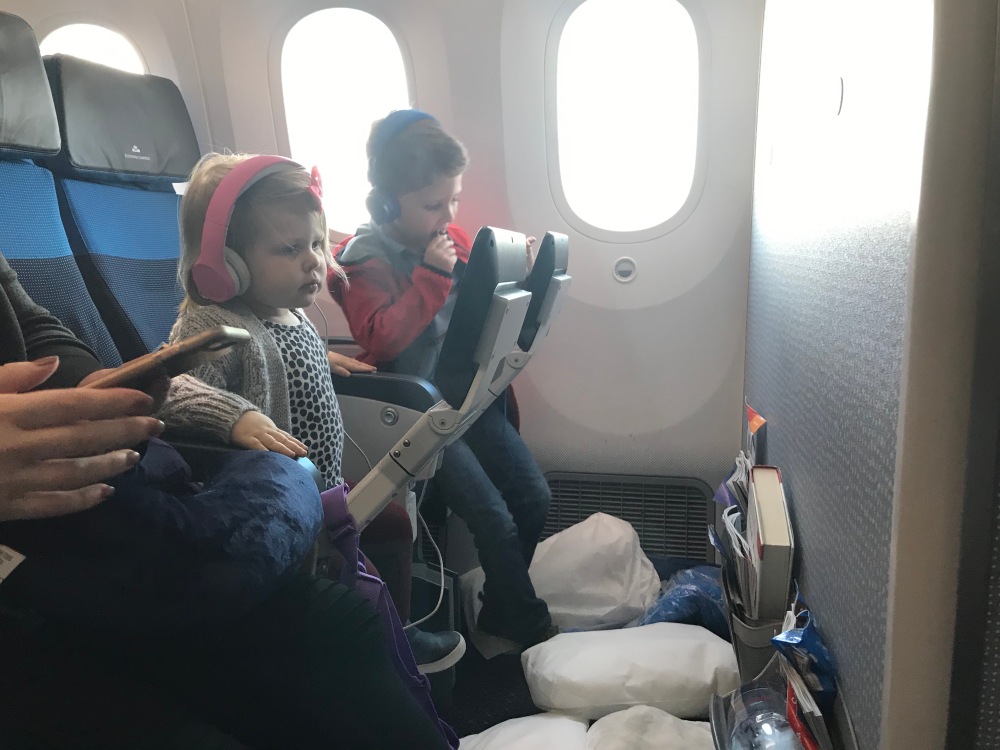 Mia was a hot mess. She loved that she could plug in her own head phones and did so repeatedly saying, “I’M IN CONTROL!” She made FREQUENT runs into First Class eliciting looks from those passengers when she squealed as we carried her back to economy. She screamed and cried for no apparent reason. Flight attendants brought her grapes which seemed to placate her slightly. She was just so tired she didn’t know what to do with herself. We finally got her to fall asleep on the floor in a makeshift bed.

She slept really well there and if the flight had been a couple hours longer or she’d gone to sleep a couple hours sooner, she might have been in a better mood but it wasn’t, and she didn’t. She was PISSED when she was woken up by lights being turned on in prep for food service. She was FURIOUS when we had to strap her into her seat belt for landing.

For Mia, tired = wired. While we waited at the Amsterdam airport for our connecting flight to Aberdeen she ran around saying, “SUPER POWERS” at the top of her lungs.

When we finally boarded, Mia proceeded to tell me that she needed to get off our plane because her plane was over there.

The Hot Mess Express didn’t sleep a wink on that flight or until we got home and got some food in her.

We already miss everyone and everything about Texas but are very happy to be home!