It has been raining all. damn. week.

I think that this weather is what Scottish people refer to as dreich – meaning dreary, gloomy, bleak, miserable, grey, depressing, devoid of sunshine…you get the point.

Picking up Brooks and/or Mia from school has been an exercise in racing the rain and trying out a variety of outfit combinations to keep dry and then eventually just giving up and being thankful that I don’t have to be anywhere presentable usually after drop off and/or pick up. I’ve also been racing the police officers that have been patrolling the streets outside their school, writing tickets to those parked illegally – which I nearly always am.

Then, after a week of dreich, you’re rewarded for not fleeing the country with almost unreal sunsets and sunrises. Not to mention the most vibrant rainbows and double rainbows I’ve ever seen. These pictures come no where close to doing the colors justice. They are also not edited outside of rotating them to somewhat proper orientation as they were quickly snapped while driving. Ah, I mean while at stoplights… 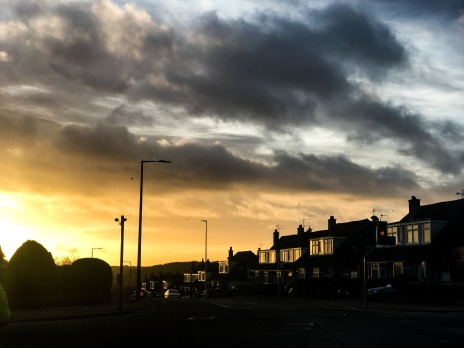 There were double rainbows at both sides of the arch but I wasn’t in a good spot to catch them.

Unedited sunset – yes, for real. Those were the real colors.

I asked a friend if this was winter.

She said winter is worse.

As long as I can somewhat frequently be graced with sights like those above, I might be able to make it. All of my expat friends say that they love living here. Surely winter can’t be that bad, right? Although I will say that a good many of them are from Canada…

To head off the internal gloom that could come from the dreich outdoors, I’ve been researching holidays to possibly take during the February half-term holidays. Yes, American friends – a week of holiday during the longest school month, yet shortest real month of the year. (Then two weeks off at the beginning of April plus two days for the Easter holiday and a one day holiday for May Day with the summer term ending at the end of June. Pretty good, eh?) Although I think it might take an act of congress to get Brett to leave on a proper holiday. Why do we Americans think that the entire operation will fall apart without us there to hold down the fort? Anyone with suggestions on where to go? With the vast majority of Europe and Northern Africa within easy(ish) flying distance I’m finding the magnitude of possible locations overwhelming.

There is a ton more going on here than just the weather. I haven’t yet posted as I haven’t sorted it out in my brain quite yet but rest assured that they’re coming…

“The rain is God’s way o’ cleaning the coos”

– Scottish saying that basically means every cloud has a silver lining